Watch our video presentations from May 2018:
“Sands of Time Flow Back through Time“ 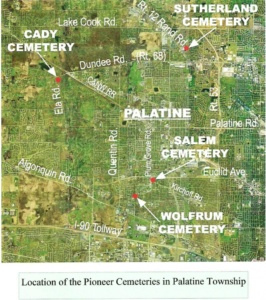 The history of this cemetery is lengthy and complex. The cemetery began when Ezekiel and Adaline Cady buried their son, Wilbert, on a knoll behind the orchard on their farm in 1841. The Cadys and most of the early Deer Grove settlers had only been here a few years and there was no church building and no cemetery. Other nearby settlers added the graves of their dead to Wilbert’s as time went on. In 1856, Ezekiel and Adaline Cady deeded the land the cemetery was on to the Palatine Township trustees and their successors. Cady is the first cemetery to come under the township’s care.

The northeast corner of Dundee Road and Ela Road was once the heart of the Deer Grove community. Deer Grove Cemetery, also known as Salem Evangelical Cemetery, was the burial ground for the Salem Evangelical Church which once stood nearby. The church moved to Barrington in 1865 but still owns the cemetery and continues to make interments there.

Original Cemetery donated to the village by Joel Wood. The gate opens on Smith Street north of Colfax Street. There was formerly another, smaller opening south of the main gate, now closed off with the fencing.

The first 18 plots are to the left of the entrance gate and are a potter’s field, also known as a pauper’s field for unknown people or the poor who cannot afford a plot. Most do not have stones or the exact location not known.

Indian Cemetery is depicted on the map to the right drawn by Vernon Irish depicting roads and pioneers of Palatine Township from 1835 to 1850. Mr. Irish drew the map in 1955 and used various sources at the Chicago History Museum. The southeast corner of Dundee Road and Ela Road today is the low end of a modern subdivision. Ed Lace formerly of Cook County Forest Preserve District says that topographic maps of the 1920’s indicate that the area was once high ground. It is believed that Cook County used the corner as fill for the nearby viaduct over Northwest Highway. In 1956 pioneer descendant Allen Bennett of Chicago gave a lecture on the cemetery to the Palatine Historical Society but no notes survive.

The United Evangelical Church was organized in 1848 and the original St. John’s church was built on the land donated by Morgan Johnson. In 1876, a new church was built on the same site and renamed St. John. In 1885, this building was struck by lightning and burned. In 1885, a new church was built and still stands, though renovated in 1948. The church is now St. John United Church of Christ. The cemetery directly east of the church building is the oldest part and people were buried chronologically as they died rather than in family plots. These stones are mostly in German and are eroded making them difficult to read; the oldest ones date from the 1850’s. East of the parsonage is the more recent part of the cemetery where the Mount Hope sign sits at the corner of Roselle and Algonquin Roads.

Prior to 1901 Mount Hope Cemetery was known as St. John’s Cemetery. To see a transcription of burials in this older section, Click Here.

To see a transcription of burials in the modern part of Mount Hope Cemetery, Click Here.

To see photographs of the modern part of Mount Hope Cemetery, Click Here.

St. Michael the Archangel Cemetery began when the Angel Guardian Orphan Society of Chicago acquired three farms southeast of Roselle Road and Algonquin Road owned by the Porep, Fasse and Joy families in 1956. The Angel Guardian Orphan Society was a German Catholic organization founded in 1865. The Society ran an orphanage at 2001 West Devon Avenue which relied on revenues from the operation of cemeteries. The Cemetery was consecrated in 1958 and now covers 350 acres.

The cemetery at Plum Grove and Kirchoff Roads began as an adjunct to the Salem Evangelical Church. The church was originally on the south side of Kirchoff Road at Plum Grove Road. Circuit riders from Des Plaines held services for the early Plum Grove settlers. The church was built on land donated around 1862 by Frederick Thies and the cemetery was on the north side of Kirchoff Road. All services were in German. In 1912, a lot was purchased on Plum Grove Rd. and Lincoln St. and the church building was moved into the village to better serve its aging congregation. The cemetery remained in the care of Salem Church. In 1955, the congregation disbanded and the building was sold to the Lutheran church. The cemetery went into the hands of the Illinois Conference of the Evangelical United Brethren Church. A shopping center was constructed around it in 1970. Palatine Township received custody of the cemetery in 1974 and now maintains it.

Patrick Cox competed his Eagle Scout project here in the Spring of 2012.  He put up an 80 ft. split rail fence along the parking lot side of the cemetery, repainted the sign, put in a sitting bench, ans planted a pair of bushes.  In July, Stonehuggers restored a couple of tombstones here and the cemetery looks very nice now.

Sutherland Cemetery is on Old Hicks Road just north of Rand Road. This pioneer cemetery began on the farm of Silas and Lucinda Sutherland. It served as a burial ground for early settlers at the northeastern part of Palatine Township. Silas Sutherland deeded the land to Cook County on June 10, 1863, for $1.00. The earliest known burial was in 1841. By the mid-20th century the cemetery was in a state of neglect from fallen trees, brush, trash, animal burrows, and vandalism. In 1974, the Palatine Township Cemetery Committee began looking at our old pioneer cemeteries with the hope of restoring them. They found that Cook County owned the Sutherland Cemetery and contacted them. The County was not aware that it owned the cemetery and sent someone out to survey it resulting in a clean-up of the area. In 1975, a $75,000 federal grant from HUD allowed the County to clean out the cemetery, re-grade and re-sod it, install a chain link fence, and provide maintenance. Surveys of the stones were made in 1968 and again in 1986, and some old photographs taken many years ago have helped to make the following list of burials here because many stones are no longer here. In 2002, Palatine Township took over ownership of the cemetery from the County.

Union Cemetery on Greeley Street south of Palatine Road has also been called Southside Cemetery and German Cemetery. Its correct name results from the north half being reserved for Immanuel Lutheran Church and the south half for St. Paul’s Church. Originally it was started by the Lutheran church. In 1882 H. C. Batterman donated additional land for the use of St. Paul’s Church. In recent decades the condition of the cemetery deteriorated. In 1981 a cemetery association was formed and since then has been responsible for maintenance and operation. Fundraising has provided a permanent trust fund for these services and directors from both churches oversee the cemetery.

Wolfrum or Old Plum Grove Cemetery is the oldest known cemetery in Palatine Township. It began in an unused corner of Orrin Ford’s farm where he settled in 1836. When Ford sold his land circa 1856, he deeded the cemetery to Cook County. Today the cemetery is adjacent to a modern subdivision. It is located at the end of a path that runs off of Greenwood Court in Rolling Meadows. There are old stories of wooden crosses marking the graves and of a farmer who took some of the stones to ford Salt Creek in his wagon. Today there is no stone in its original location. It has been called the Lost Cemetery because it was forgotten for many years. Weeds and scrub brush grew over the stones and covered them from view. In 1975, the city of Rolling Meadows was laying a sewer line to serve a new development. The construction crew, clearing away trees and brush inadvertently plowed through the tangled growth covering the cemetery and damaged the few stones left standing.