1986: Northwest of Gilbert and Quentin Rds.

The Arlington Crest Subdivision northwest of Northwest Hwy. and Wilke Rd. was built in 1939 on Wilke Farm. Homeowners almost immediately began suffering drainage problems. They also had to fight battles with neighboring municipalities. Arlington Heights tried to place a garbage dump just to the north. Rolling Meadows lost its effort to annex the subdivision. Homeowners finally consented to annex to Palatine in 1960. It took some years for the village to persuade residents to shoulder assessments for sewer and water connections. 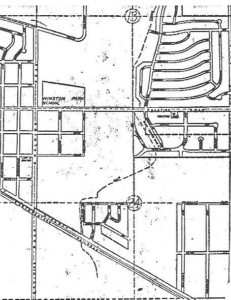