Since 1835 Palatine Township has been home to hundreds of farms worked by thousands of farmers over the years. Our first farmer, George Ela, plowed a large field at what later became Lake-Cook Rd. and Quentin Rd.

177 years later, Harold Bergman still cuts hay at his Highland Dairy Farm on Algonquin Rd. just west of Ela Rd.  In his upper 90’s, our last farmer finally gave up his land to a company building residences.  His own farmhouse has now been torn down. 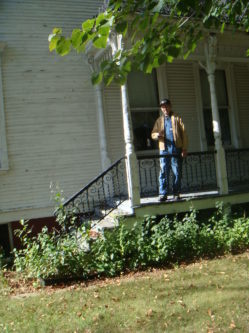 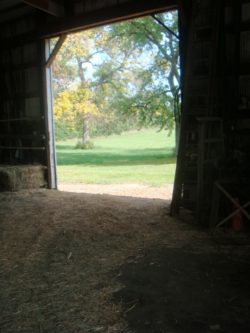 Some of the more colorful names to grace homestead entrance signs:

Atlasta Farms was a poultry farm owned in 1927 by the Suter/Suitor family. Location unknown.

Fair Acres on Kirchoff Rd. was owned by Aribert Wild in 1949.

Fleetwing Farm, owned by Martha Jayne, hosted many horse shows on the north side of Central Rd. west of Roselle Rd.

Maple Grove Farm on Northwest Hwy. 1/4 mile east of Quentin Rd. had a big auction in 1945.

May Day Farm just east of Inverness Country Club flourished from 1936 to 1962.

Pal-O-Mine pony farm, Auburn Woods Drive, was a 20-acre property purchased by Mr. and Mrs. Kurt Stier in 1956. The Chicagoans had given a rocking horse to their daughter and promised to give her a pony when they moved onto the property. The children loved the pony so much that they bought 20 more and went into business giving pony rides to other children. Kurt was a local distributor for Alpoa Swimming Pools. In 1963 the national spokesman for the company Johhny Weissmuller, who played Tarzan in the movies, stopped by and was photographed at the family pool with the Stier children. By 1988 the Stier children were grown and the family sold the land to developers who built the Auburn Woods Subdivision. The old farmhouse at the entrance was torn down. A huge brick home at the north end still stands, however, and is owned by a descendant of the family.

Rand Hill Farms sold dairy products in 1940. A good guess is that it was near Randhill Cemetery on Rand Rd.

Ridgeway Farm, later known as Camelot was an institution for the care of troubled adolescents on Dundee Rd. east of Northwest Hwy. from 1970.

Sunny Akres, northwest of Palos Avenue and Poplar Street, was a five-acre prairie west of the YMCA when Bob and Mabel Cummings purchased it in 1928. They owned a cartage business. She was from a trucking family and was the first woman to join the Teamsters Union in the Chicago area. He was very handy and built their four-room bungalow from scrap pieces of packing lumber. One day their newborn pigs got sunburned so they rubbed them with axle grease to soothe them. Goats kept the grass short. When the bungalow began leaking they hung all their clothing from the handrails of an old discarded school bus that they kept parked on their property. In 1996 Mabel became ill and her handyman Pete Wegrzyn rode the township senior bus to get some supplies. He told driver David Hammer he had not left the farm during his stay there and was seeing Palatine and its stores for the first time in thirty-five years!

Tri-Color Farm, northeast corner of Roselle Road and Algonquin Road, was owned by George Jayne (1923-1970) from 1960-1967. It was named for the three-colored ribbons given to the champion of multiple events at horse shows. The over 100 acre property had a large central masonry building with a domed indoor arena flanked by 50 stalls each on the east and west sides with concrete aisles and another 20 stalls on the north end. The south end featured a clubhouse with a large fireplace, extensive views of the indoor arena and offices. A residence topped the clubhouse and offices. The north-side large two-story separate concrete storage building was divided for grain, straw and hay.

The south-side manicured outdoor fenced riding arena featured fine-textured grass surrounded by the right mixture of soil and sand for good footing so riders could practice controlling their horse with perfect form on a flat surface. This ring fronted the main property entrance and Algonquin road. The next fenced ring to the west contained the fences for hunters to practice the best form for horses over natural-looking obstacles. The third fenced arena was for the show jumpers, where style didn’t matter, but clearing the odd-looking and differently-shaped fences did. Tri-Color was known for the quality of their facilities and the creativity of the fences, such as two large startling ‘Kilroy Was Here’ coops in the jumper ring. The facilities were completed with two small paddocks, three large fenced pasture areas and a riding trail around the property perimeter.

George Jayne was a well-known horseman and trainer. Horses and riders he, and his exceptionally accomplished equestrienne wife, Marion, trained and coached won many awards at horse shows across the North American continent. Known for their personal integrity, George and Marion were both honored by their peers as recognized American Horse Show Association judges. As a result of Bob Galvin’s children learning to ride at Tri-Color Farms, his company, Motorola, Inc. bought property down the road at Algonquin and Meacham and eventually moved the company headquarters to that location. In addition to their professional and business successes, the Jaynes supported local Girl Scout troops for their horsemanship badges.

George and Marion both learned to fly small airplanes so they could reach their nationwide equestrian commitments and spend less time away from their children. Since horses were normally located in rural areas, they purchased a small twin engine plane to take clients to see prospective horses.

In 1965 George asked employee Cheryl Rude to hitch a horse trailer to his Cadillac. When she started the car, it blew up and killed her instantly. The car bomb was planted by people hired by Silas Jayne, George’s envious older brother, and it was intended for George. Investigators were on the scene immediately. The bomber was convicted of her death in 1997.

The Farm was taken from George by the State of Illinois by right of Eminent Domain in 1967 for a fraction of its value for William Rainey Harper Junior College. The original sturdy concrete block buildings were used until they were destroyed by fire. George was murdered in 1970 with a single gunshot wound while playing bridge with his family in his home in Inverness. Police arrested his older brother Silas Jayne. Even with F. Lee Bailey as his attorney, Silas was convicted and went to jail for conspiracy to murder.

Marion Jayne (1926-1996) went on to establish several successful businesses and she became a professional cross country air race pilot. She has been inducted into the WAI Pioneer Hall of Fame, the International Forest of Friendship and named a 100 Aviation Hero for the First Century of Flight along with the Wright Brothers, John Glenn and Amelia Earhart. She and her second daughter won the 1994 FAI Gold Medal for the longest Air Race in history in 24 days around the world. As of 2013, she is the only US pilot & the only woman to have raced a plane twice around the world and she still holds the record for the most cross country pilot-skilled speed air race victories. As her one of her grandsons cried during her final fight against ovarian cancer she summoned the strength to lecture him. She said, “You should be happy for me, I will be free of pain and I will see your grandfather George – who I still miss and have always loved.”

Thank you to Patricia Jayne Keefer for the corrected information!

Wood View Farm was another name for Plum Grove Farm and sold horses in 1950.

The Frost farm started out as 80 acres purchased by Louis H. Frost and his wife Anna. Louis grew up on his fathers farm in Palatine Township. Louis’s farm was west of Ela Road in the southwestern part of the township. His son, Louis W. Frost took over the farm after his father and raised another generation of Frosts there. These photographs were given to us by Vernon Frost of Palatine. 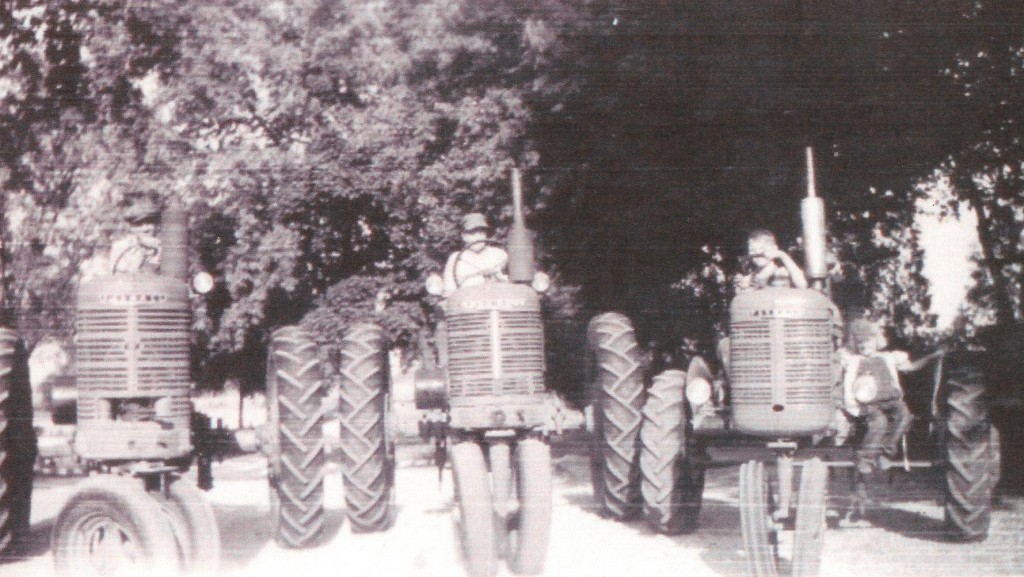 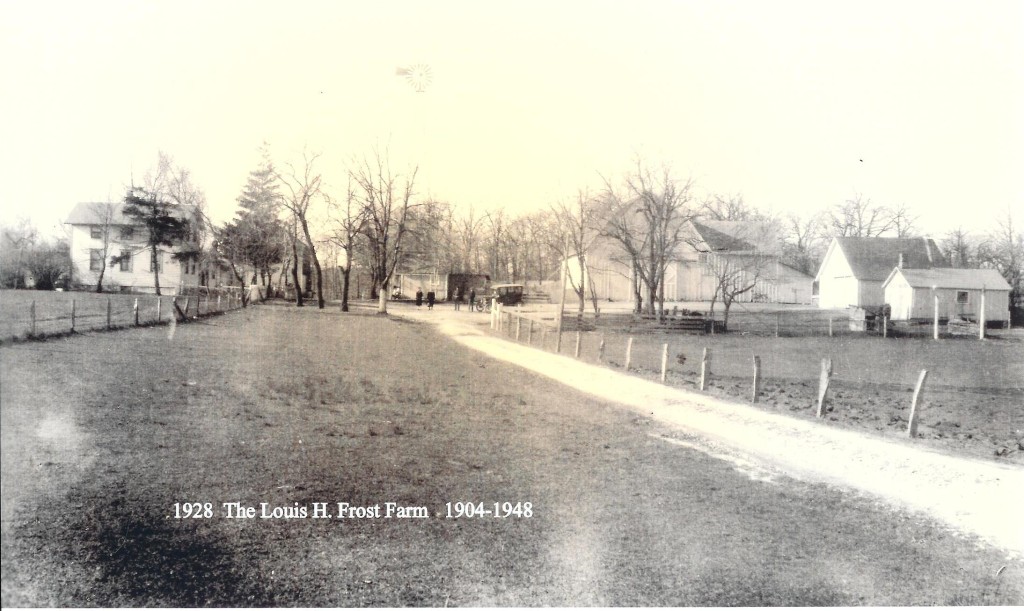 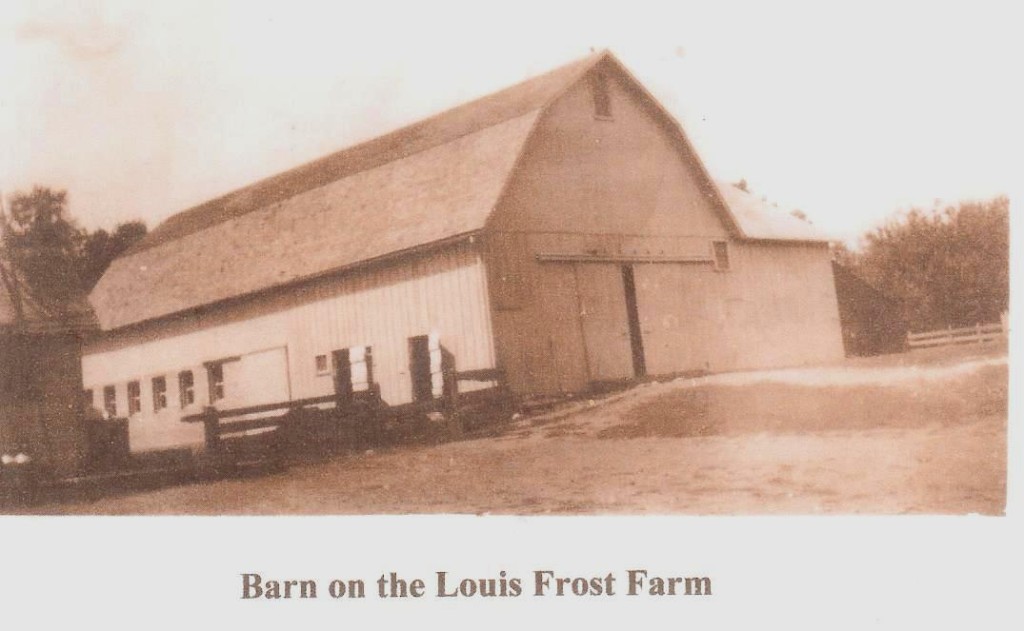 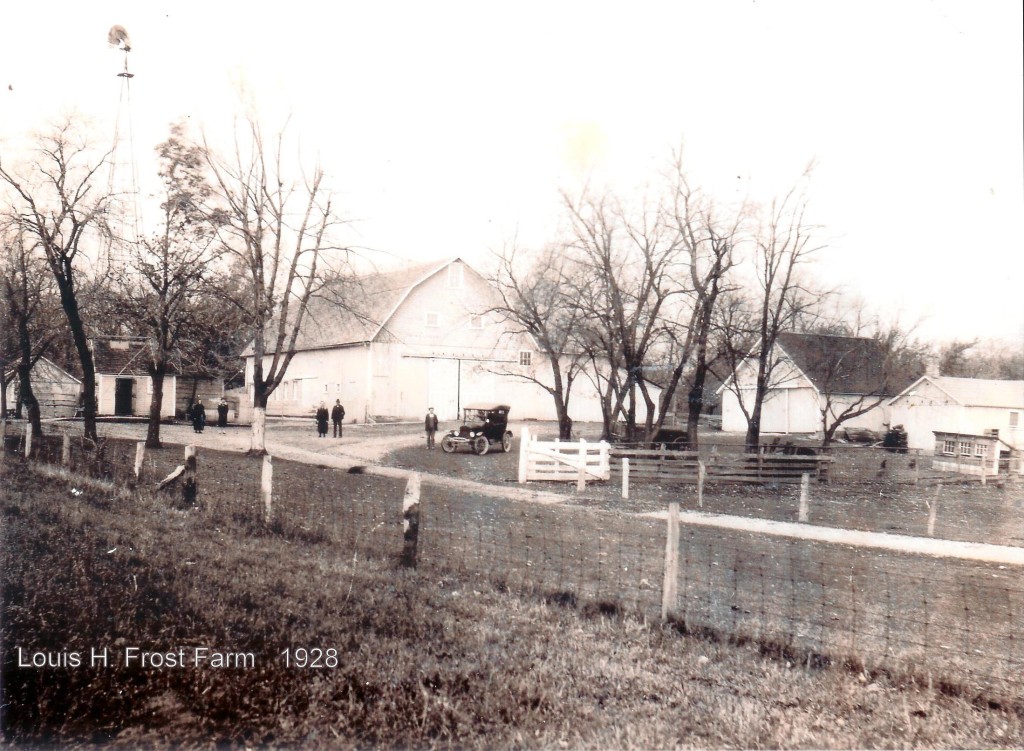 The Harry Alten family owned a truck farm at what is now the Palatine Distribution and Processing Center of the U.S. Postal Service at 1300 East Northwest Highway. The 60 acre farm was bounded by the west side of Arlington Crest Subdivsion, Northwest Highway, Salt Creek and the south end of the Charles Rizzo farm. They lived there from about 1944 to 1956 and raised all kinds of vegetables including cabbage, green beans, leaf lettuce, spinach, onions, carrots, parsnip and cucumbers. They placed the produce in sacks or bushel baskets and trucked them down to South Water Market in Chicago. This photograph shows three brothers Gilbert “Mike” Alten, Harry Jr. and Dale with their father and mother Harry and Laura behind a truck full of sacks of onions. The farm had an Arlington Heights address at the time.

These photos below show the house and two smaller farm buildings. The one behind the fuel tank was formerly a hog barn. The other was a corn crib. Just to the right of the farmhouse is a little shed that kept the well machinery from freezing.

The photo of the farm field demonstrates how relatively ’empty’ the landscape was in the 1950’s. Row upon row of baskets of onions were allowed to dry in the sun. The photos were taken about 1955. The next year the Alten family moved out to Harvard, Illinois and continues to grow vegetables on a truck farm.

Thank you Harry Alten Jr. for allowing us the scan your photos and taking the time to tell us your story! 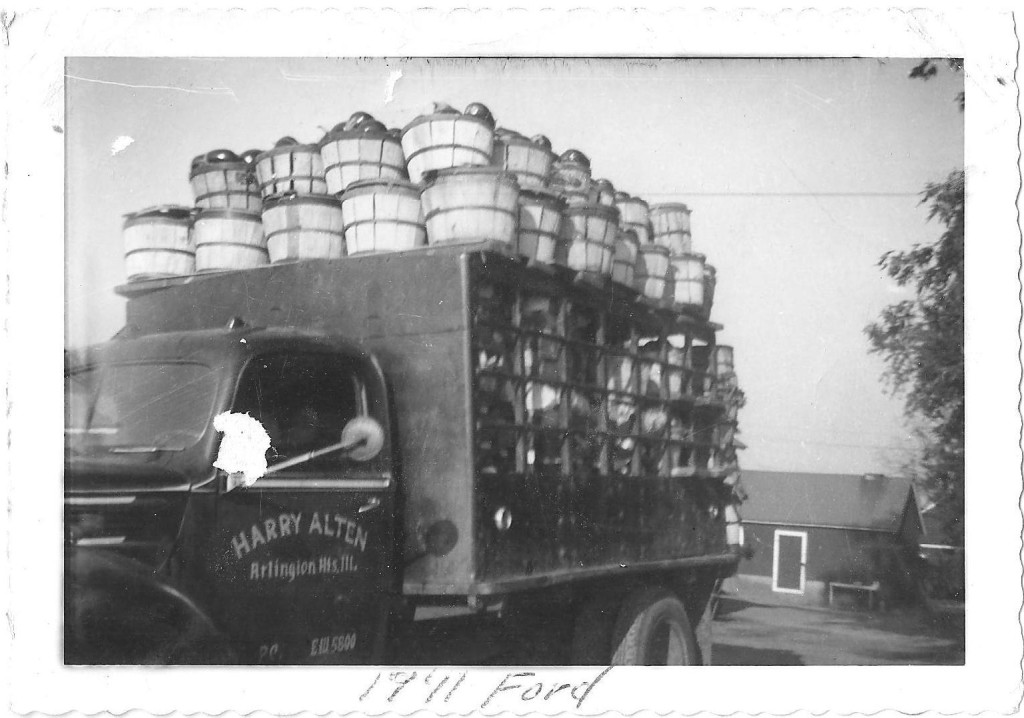 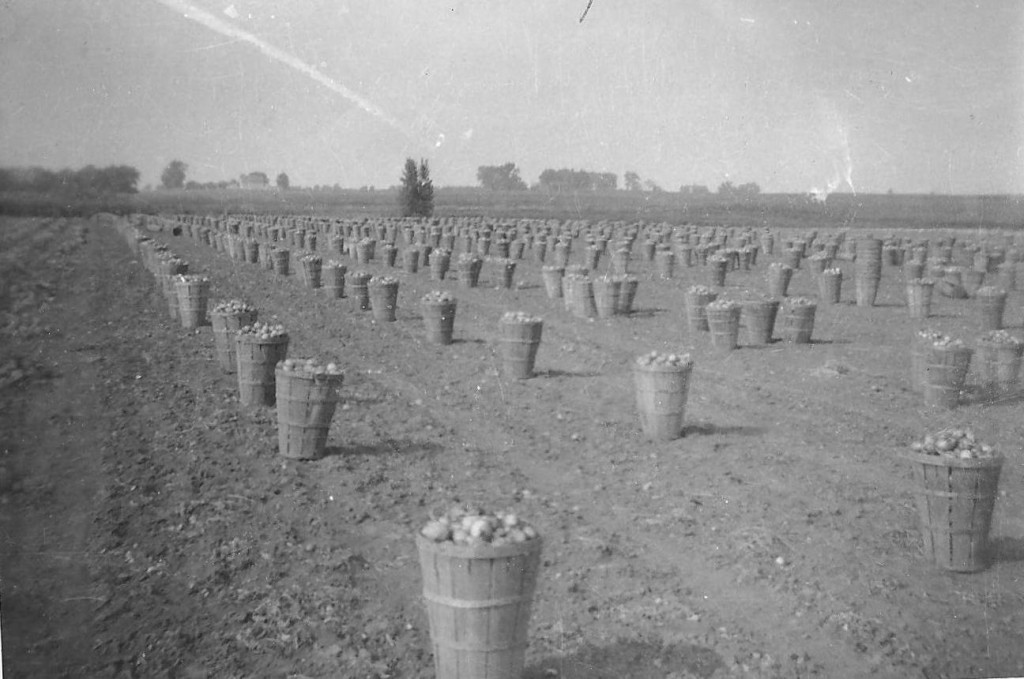 Rows of Onions Drying in the Sun 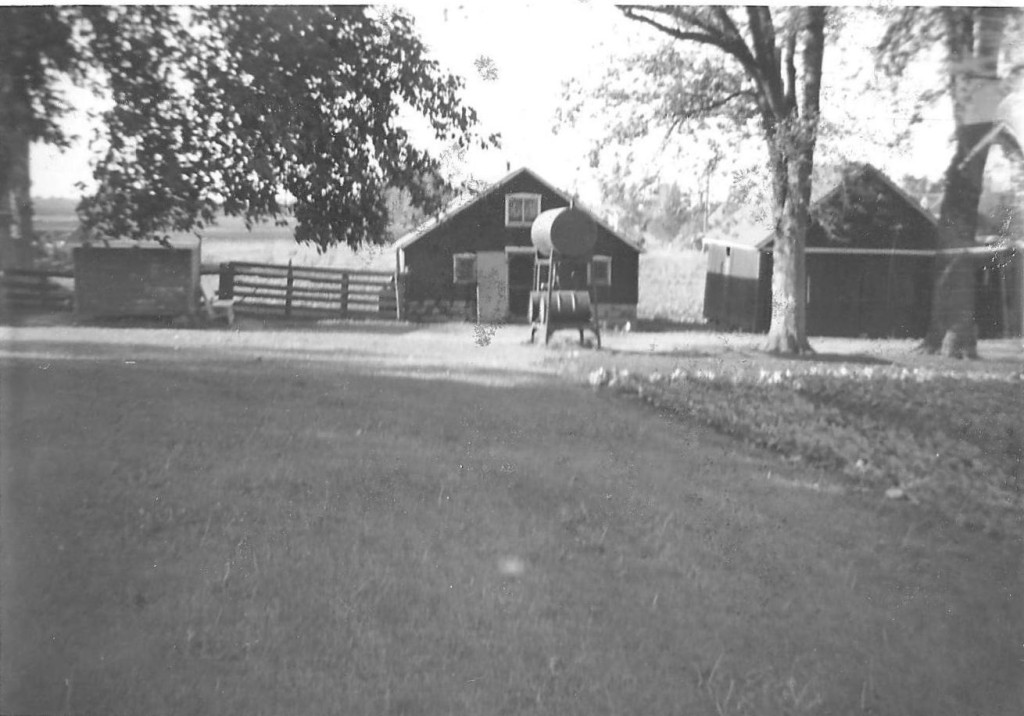 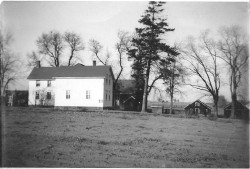 Ernest & Edson Baldwin cutting grain with a cradel.  The farm was on Baldwin Road, now Northwest Hwy. where part of the Palatine Golf Course is.

This is the Kolle farm where Little City is now on Algonquin Road.

The Wilke farm was south on Quentin Road. 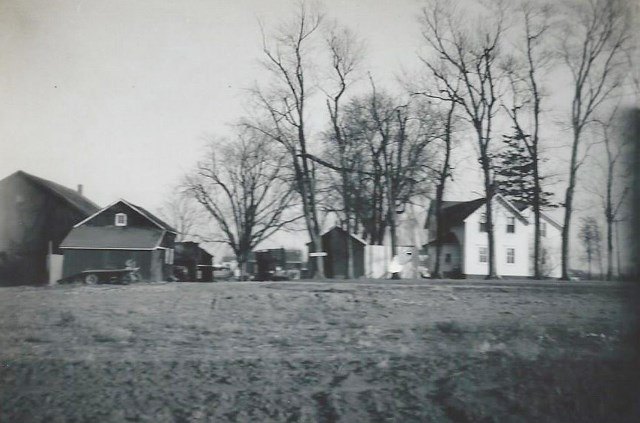