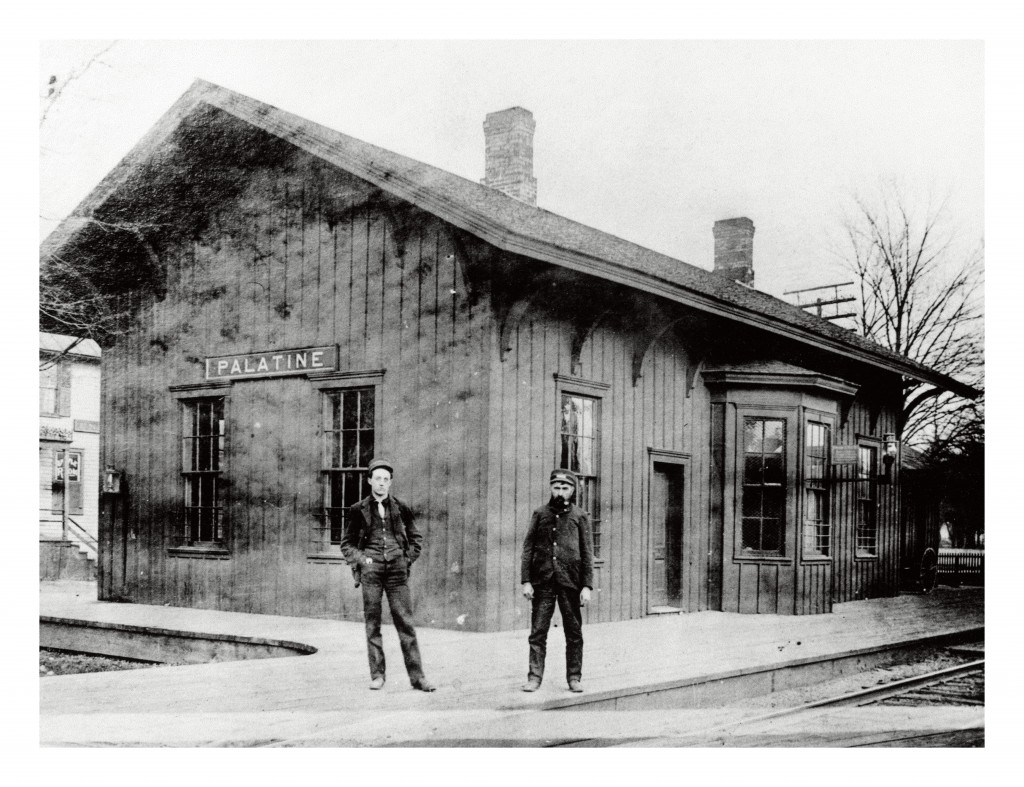 The depot was built circa 1855 by Hiram Thurston on land donated by Joel Wood. It was on the north side of the tracks. 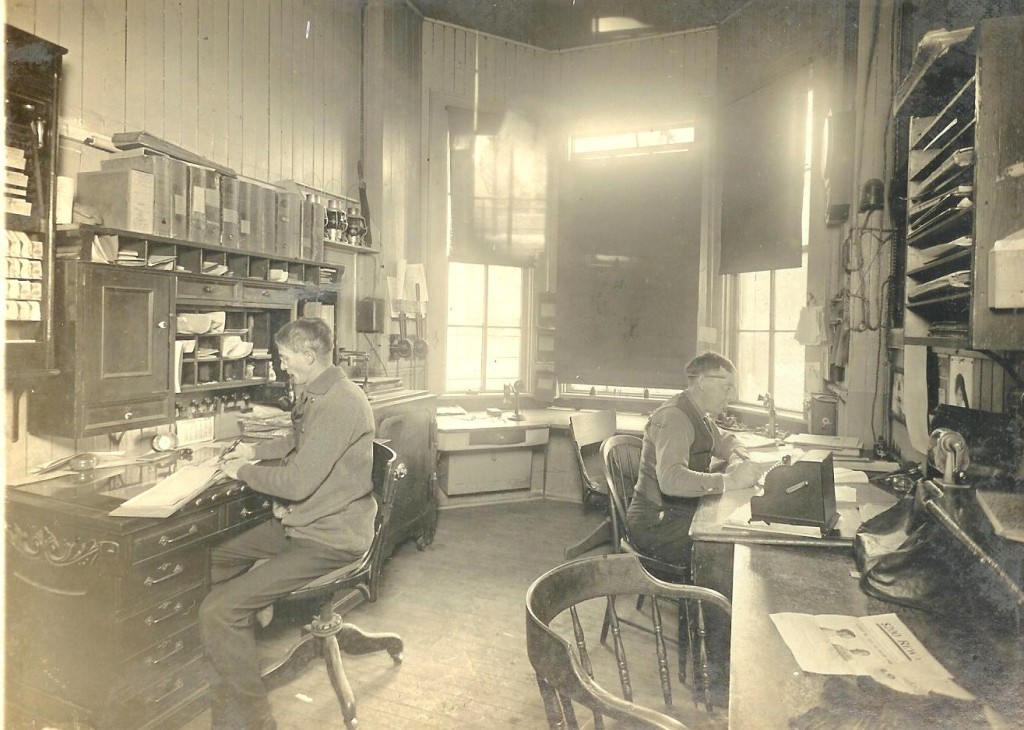 John Arps and William Brockway working in The Depot 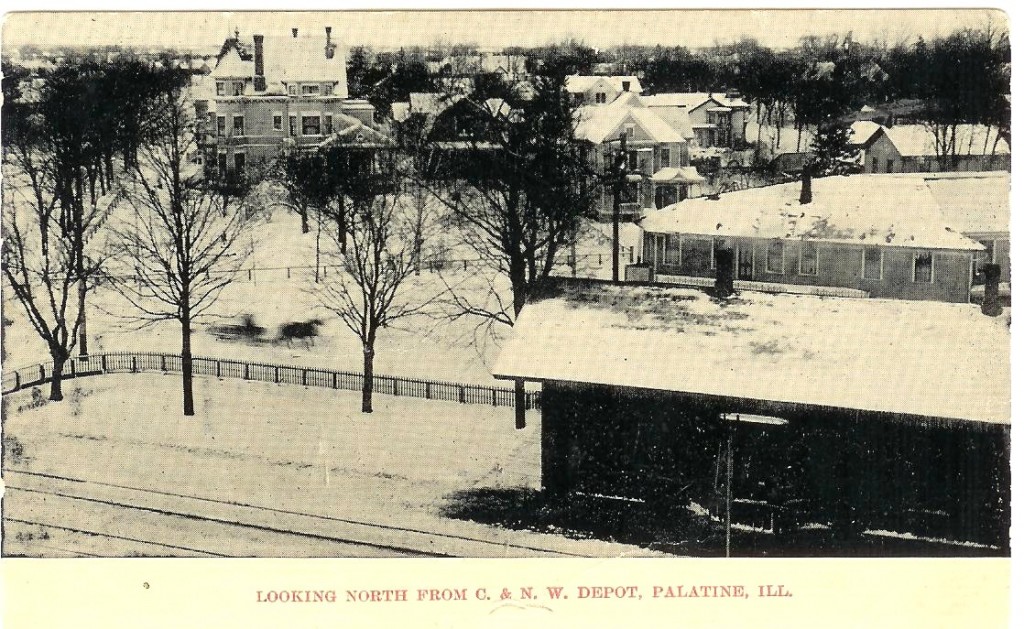 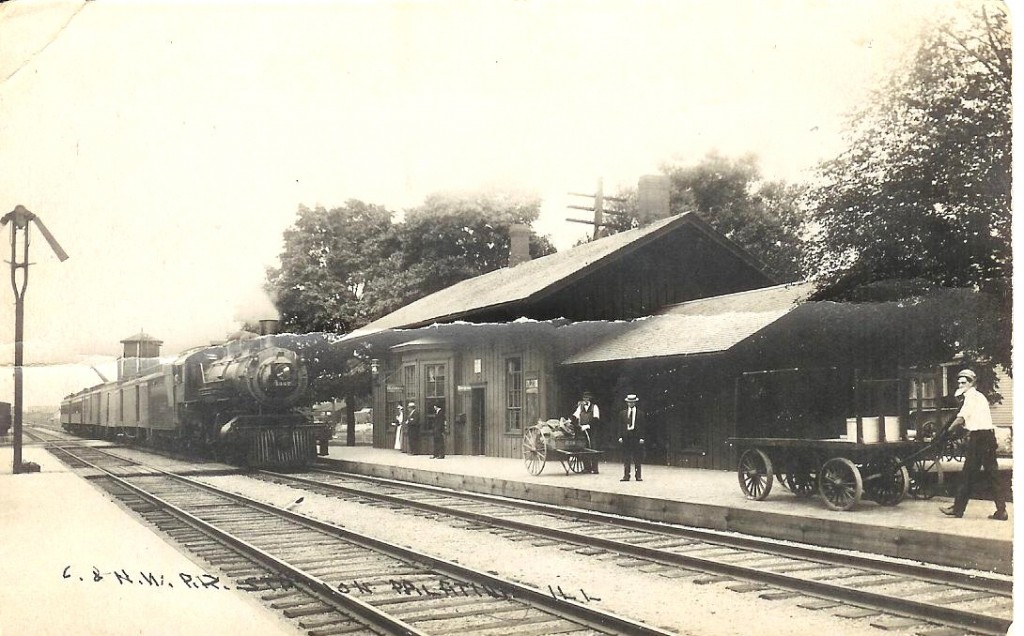 This strip of park was south of the railroad tracks across from the depot. It disappeared when the C. & N. W. RR built a third track south of the original ones.

Saturday, September 16, 1911, about one hundred years ago, saw the opening of a shortline railroad that extended from Palatine through Lake Zurich to Wauconda. Thirty-six hours before the grand opening, the road bed was unfinished, and there were no engine and cars! The Chicago & Northwestern Railroad sold the PLZ&W RR an engine and rented out a passenger car. The engine, called Maud, was not much to look at, but was the dream and pride of the new railroad. The train left Palatine around 2 o’clock; part way to Quentin Road the tracks turned north along the Converse and Baldwin fence line to Dundee Road. Today this is the Palatine Park District bicycle trail. Crossing Dundee Road it headed east to the front gate of Dr. Wilson’s private Deer Grove Park, now the entrance to Camp Reinberg. The train ride to the park cost only ten cents. Passengers could disenbark at any road crossing. That first day was proclaimed Palatine Day at the park. The tracks didn’t quite make it to the end and men were still working along the route. The Palatine Military Band played to the crowds of people that soon arrived. Two local baseball teams vied with each other and visitors enjoyed the new dance pavilion and refreshment stand. Of course there were speakers to toast the new railroad and fireworks lit up the evening.

Algonquin Road was known for many years as Algonquin Trail, Woodstock Road and Woodstock Trail.  Stagecoach drivers also knew it as Woodstock Trail.  After World War I, returning veterans developed a new interest in Native Americans, culminating in the Chicago Historical Society’s “Indian Day” at Deer Grove in 1920.  About this time Cook County renamed the road Algonquin Road in honor of the great family of languages spoken by Native Americans in this region.

Baldwin Road was an old farm road that prior to 1930 meandered along what is now Northwest Highway east from Quentin Road to Clark Street, Carpenter Street and finally Williams Drive ending at Rand Road.

Central Road is the dividing line between several area townships. As such it was often neglected. It was called Palatine Township’s worst road in 1929. The road appears on a Wheeling Township plat map as early as 1853. In the early days it was known as Center Road. The building of Route 53 split a neighborhood apart in Rolling Meadows. A footbridge over Route 53 was suggested in 1962 by some residents but never built.

For thousands of years Dundee Road was likely an animal path. It meanders west of Quentin Road because animals tend to go around natural obstacles like swamps. Native Americans found it useful because it joined their main highways, the Des Plaines River and the Fox River. By the time settlers began arriving in the 1830’s it was known as Wheeling and Dundee Road because it connected those two villages. During Indian Day festivities at Deer Grove in 1920 traffic was backed up several miles on the skinny little gravel road. Cook County passed a bond issue soon thereafter and paved it. In the 1960’s the two lanes were widened to four lanes east of Hicks Road. The intersection at Northwest Highway was known for years as “Death Hill” or “Death Corner”. The intersection has been rebuilt a number of times. The path leading northwest from Quentin Road used to allow vehicular traffic and saw quite a few accidents also.

This scenic road was also well-traveled by Native Americans. It connected several prairies, forests and burial grounds. Usually roads are named after families that lived nearby, but George Ela never lived on Ela Road so far as we know. He lived along Quentin Road and then moved to downtown Barrington. However, he served the area in many capacities as a businessman, postmaster, state representative and township supervisor. As supervisor, it is likely that he had a hand in improving and maintaining this road.

Euclid Avenue was a street on the north edge of downtown Arlington Heights. We don’t know how the name was chosen. It originally was known as Cemetery Road. It was laid out by Cook County in 1845 and corrected (?) in 1866. Cook County extended a four lane pavement west to Route 53 in 1963. It was further extended to Plum Grove Road in 1968 and west of there in 1973.

Freeman Road was an old meanering farm road named after the Freeman family, either Samuel, W. B. or Thomas. Their homestead was just beyond the bend as you head southwest. A gravel pit was at the intersection with Central Road.

Lake Cook Road has also been known as County Line Road. Because it was on the edge of two counties, nightspots and adult entertainment venues found it to be a favorable location. It was paved from Rand Road to Eastern Avenue in Barrington in 1946-47. For most of its history the road detoured around Deerpath Lake via Hicks Road and Rand Road. The detour was removed when a bridge was built over the lake and the road widened to four lanes. Pains were taken not to damage the ecology of the lake and its surrounding wetlands.

Northwest Highway was nothing more than a pair of wagon ruts in 1899. In 1919 Arlington Heights Village President Al Volz suggested to Mount Prospect Village President and Cook County Commissioner William Busse that the road should be paved. The plan was to make it part of the Northwest Trail which the American Automobile Association proposed between Chicago and Yellowstone National Park.
Cook County passed a bond issue for the section from Des Plaines to Barrington in 1919. Parts of several farms had to be condemned. Several controversies held up construction. Businessmen wanted it to go through the downtown but the State of Illinois said there were too many turns with that route. Cook County also wanted the village to pay for sewers along the way. Palatine refused to do this and so the highway was routed along Hicks Road to Colfax Street. During the 1920’s “Sunday drivers” returning to the city would suffer huge traffic jams along the two-lane road.
When it was widened to four lanes in 1930 it was rerouted away from Colfax Street and along its present course on Baldwin Road. The intersection at Dundee Road was called “death corner” as early as 1930. That intersection has been rebuilt three times. It reached Cary, Illinois in 1932. The Cumberland Viaduct in Des Plaines was built in 1936. The wooden railroad bridge to the east supports a two-railroad crossing and has been on the planning boards for replacement for over fifty years. It was built in 1930. Northwest Highway became U.S. Route 14 in 1938.
Traffic lights were installed at Palatine Road in 1949, Baldwin Road in 1961, Quentin Road in 1970 and Smith Street after 1972. In 1963 the highway was a “gasoline alley” with 15 gas stations and 8 restaurants.

Palatine Road is the main drag through Palatine, and yet it originally was a patchwork of little roads. Westbound it was known as Kitson Road and ended in a swamp around Quentin Road. Residents objected to improvements in 1855. To the east it was known as Palatine Road or Chicago Avenue. It was called Chicago Avenue because prior to the construction of Northwest Highway in the 1920’s, the route to Chicago was directly eastbound to Milwaukee Avenue. Before pavement arrived it was a typical gravel road with its attendant potholes and dust. The village “oiled” the gravel from time to time to keep the dust down. We can imagine how messy travel was in those days.
Cook County paved it as far west as Roselle Road in the 1920’s and all the way to Algonquin Road by 1930. Cave-ins at the Quentin Road bridge over Salt Creek were so common that Cook County moved the creek in the 1930’s. Federal grants paid for blacktop on top of the concrete in 1935. Franklin Roosevelt’s Works Progress Administration (WPA) did such a poor job of paving it in 1937 that the Herald called it disgraceful.
The Navy built a landing field for pilots to practice landings somewhere near Barrington Road in 1942. The State of Illinois installed traffic lights at Northwest Highway in 1949.
Cook County came up with a big plan to turn the road into a “junior expressway” in 1957. A hundred residents filled the village hall to object to the plan to run four lanes through the downtown. Four lanes did extend as far west as Hicks Road by 1959.
In 1966 thirty years of persuasion paid off as Cook County changed the name from Chicago Avenue to Palatine Road. In 1967 the system of local and express lanes was described as a “nightmare” at two “death corners”, Schoenbeck Road and Buffalo Grove Road.