In the late 1960’s developers dreamed up several projects that never got off their desks:

Elmer Gleich had no success getting the Village of Palatine to approve his plan for apartments called Darien Fields at the northwest corner of Hicks Road and Baldwin Road. Offices and apartments that replaced the Pebble Creek Golf Course were developed by Gleich’s successors.

The Illinois State Highway Dept. was eager to build the Rand-Golf Expressway to ease burgeoning congestion in the northwest suburbs. It was supposed to lie parallel to and a little north of those two roads, but so many thousands of homes would need to have been demolished that planners finally decided it was an idea whose time had went. 🙂

Four Seasons Nursing Centers of America received approval to build a facility at the northeast corner of Quentin Road and Illinois Avenue. But neighborhood opposition eventually brought a stop to this project. Later the Palatine Township Town Hall was built on that property.

The U.S. Atomic Energy Commission decided it wanted to build an atom smasher. It needed a couple of thousand acres for the underground accelerator rings. It searched all over the country for suitable sites and narrowed their search from 85 sites down to two: today’s Fermilab site in DuPage County and Barrington Township. A world-class wildlife refuge would have been destroyed but Barrington neighbors eventually succeeded in stopping the project. School District No. 15 in Palatine also had designs on the area. Officials wanted to build an outdoor education center on the property. The Cook County Forest Preserve finally bought the property and created Crabtree Forest Preserve.

In 1986 a private group wanted to build a living history museum in the woods to the south. It would have featured an Algonquin Indian camp circa 1700, a pioneer settler’s cabin, an 1850 homestead, a turn-of-the-century farm and a farm of the future. Cook County Forest Preserve nixed the idea and created the Spring Creek Valley Forest Preserve instead. 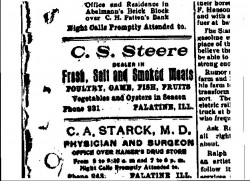 Just south of the old State Bank of Palatine building at the southwest corner of Slade Street and Bothwell Street lies a parking lot…the former site of the Palatine Theatre. It was formerly known as Seip’s Auditorium. The front consists of a facade in front of another facade!