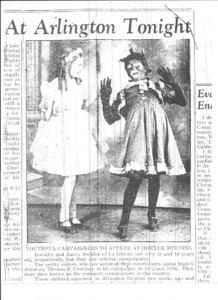 Ethnic humor proved to be hugely popular with small town audiences at the turn of the century. “Green Elephant Hotel” was a play written by Palatine Mayor A. S. Olms and performed in 1901 at the Palatine Opera House on the third floor of the Battermann Building which was located on Brockway Street at what is now the Fire Fighter Memorial. The play included characters such as “Sam Snowball” and a Jewish peddler. Blackface comedy, showcasing stereotypical African-American culture, became offensive with the coming of the civil rights movement. The last minstrel show in the northwest suburbs took place at Jack London Junior High School in Wheeling in 1967.