In August of 1862, a meeting was held at the Palatine Methodist Church by Judge James Bradwell and Mason Sutherland. The state of Illinois was mustering troops to fight in the Civil War and the two men had gotten permission to muster a company of soldiers. After talking to the men a muster roll was laid out and men were asked to enlist. After another meeting held in Barrington, there were enough men to form Company E of the 113th Illinois Volunteer Infantry. The men went to Camp Douglas in Chicago to train for the war. In October, Mason Sutherland was elected their captain. For three years these men fought, suffered illnesses, were disabled, died, or survived. Their experiences were like none these men had ever known and their camaraderie for each other would never die. The whole regiment, not just Company E, formed a veteran’s association and each summer they met in some city or town where members lived and expressed their friendship for each other and sympathy for those who were gone through church services, speeches, concerts, meals prepared by the ladies of the town, and yes, a few drinks. This photograph is from the 1903 reunion in Palatine. Some of these men were local veterans of other units but were welcomed into the activities. Three of these men are known by name. The man sitting on the ground with the hand of the man behind him on his shoulder is Charlie Fosket. His very good friend behind him was Anson Baldwin. To Fosket’s own left is August Kimmet who was not in the 113th but was a Palatine man and the last Civil War soldier to die here. — Connie Rawa

Nancy Boynton was born in New Hampshire in 1820 and was educated to be a teacher there. In 1838 she came to Deer Grove with her parents to join her brother, David, who had already settled here. Her first teaching position here was at Bangs Lake (later Wauconda) in the cabin of Judge Bangs. When the settlers at Deer Grove were ready to start a school, she taught in a log cabin on Ezekiel Cady’s farm. She was paid $1.00 a week and boarded in the school children’s homes. In 1843 she married Mason Sutherland who had come here from Vermont and had a farm at Hicks and Dundee Roads. The Sutherlands had six children. Nancy died in 1904. — Connie Rawa

William Meissner and Mary Frank were married in 1853. They settled here in Palatine Township. In 1861, they emigrated to Minnesota in an oxcart. Their daughter, Matilda, was born there. Unfortunately, there was trouble with the Indians there and settlers homes were being attacked and families killed. William himself was wounded twice and his property burned down. The Meissners returned to Palatine in 1862. They settled on a farm at Quentin and Baldwin Roads (Baldwin is now Northwest Hwy). William donated a piece of his land for a rural one-room school, originally called the Meissner School. The Meissners had seven children. Mary died in 1917 and William in 1921. — Connie Rawa

Anson Baldwin, born in New York in 1835 to Lydia Root and John Baldwin, traveled by covered wagon to Illinois with his family in 1844. They bought government land near Deer Grove and built a log cabin. Their farm was where the Palatine Golf Course on Northwest Hwy. is now. Anson enlisted in Co. E of the 113th Illinois Volunteer Infantry in 1862 and fought in the Civil War for three years. Shortly after he returned home he went to a party where he met Maryette Castle who had come here from Michigan to visit a cousin. They were married that August and spent the rest of their lives on the Baldwin farm. They had four children: Ernest, Edson, Edna, and Elode. Along with other church and village service, Anson helped form the Palatine Memorial Association. This group worked to beautify local cemeteries and organized Decoration Day (now Memorial Day) services. For many years Baldwin read the roll of the dead and then walked in the parade to the cemeteries to decorate the graves of those soldiers. He died in 1926, one of the last Civil War veterans in Palatine. — Connie Rawa

Many children were brought into this world by Mrs. Andrew Landman, a midwife who moved to Palatine after her family lost everything in the Chicago Fire of 1873. She delivered babies on the second floor of the Harmening house which was at the southwest corner of Bothwell Street and Palatine Road. It is worth noting that when Mrs. Landman’s granddaughter was born, she entrusted the case to a new doctor in town, Dr. Carl Starck. Dr. Starck practiced medicine at the building still standing at the southeast corner of Brockway Street and Slade Street. 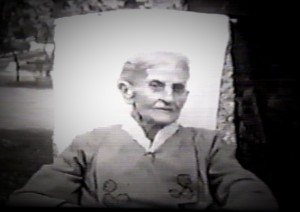 Clarinda Cady is thought to be the first white child born in Palatine Township. She married Morton Pinney and is buried at Hillside Cemetery. This rare film is from her 90th birthday in 1928. Her daughter Addie is the only other person known in the footage. She can be seen walking Clarinda out of the house in Palatine. Clarinda’s niece’s or grand-niece’s husband shot the film presumably at their home which was located at 222 North Plum Grove Road. The family is descended from pioneer settlers Ezekiel and Adaline Cady who came to Deer Grove in 1837. Clarinda was their youngest child. To see the film please paste the following into YouTube’s address bar: ObaP7uJjYzs. The video was donated by Judith Schreiber, a Cady descendant.

The northwest suburban area of Chicago knows its history because of the leadership of a single family, the Paddocks. Their newspapers under the umbrella of Paddock Publications have recorded for all time the events, the stories and the heartbeat of our communities. Each member of the Paddock family past and present has taken an interest in the citizens around them, asked and written about their lives, their loves and their hopes. And, most importantly, for the sake of history the family has safeguarded their treasure trove of information, placing it on microfilm and online for all to see and use. Thank you Paddock family!