Castles in the Air — Part I 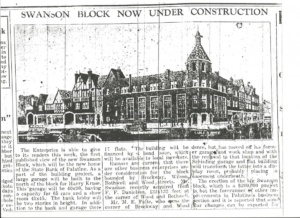 The imagination soars…Walter Swanson picked a bad year, 1929, to build his dream block northeast of Wilson Street and Brockway Street. Old homes were torn down to accomodate a magnificent building with stores, offices and flats. But the Great Depression collapsed the plan and left a hole in the ground for the next 23 years. Albert Riley was going to build King Arthur Apartments at 400 South Plum Grove Road in 1963. A year later Bee Gee Builders wanted to create Castle Court in the same location. Neither was. Palatine officials wanted to place a mall in the downtown area in 1965 like the one in Kalamazoo, Michigan, but the idea died aborning.

Take a Chance Castles in the Air — Part II