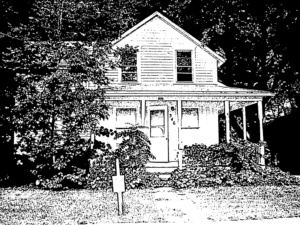 We have a photo of this home when it stood at 16 N. Brockway. It was then the James Moorhouse Barber Shop. It was moved about 1906 when the present Zimmer Hardware was built. The front porch was added after moving and the false front that hid the roof was removed. John and Ellie Baker moved here about 1915. Their daughter, Selma Deering lived here after they died until her death in 1970. The house was torn down this November, 2011 and a new house is going up on the site.