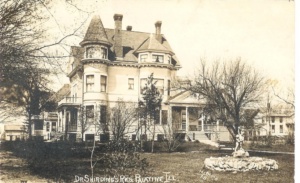 Henry Schierding was a farmer in Palatine Township. He later moved to the village and opened a general store at Slade Street and Brockway Street. He lost his first wife in 1867 and married Henrietta Matthei a year later. Henry died in 1894. Henrietta had a large home built at the corner of Brockway Street and Wilson Street. It was the showplace of Palatine. As she grew older she sought a warmer climate and moved to Pasadena, California, to live with her daughter, Matilda, in 1912. Her son, William took over the house. He was a physician and an oculist. In 1900 he married Clara Breese; the couple had two children, Esther and Henry. He held an 80th birthday party for his mother in 1917 when she returned to Palatine for a visit. By 1920, he was gone from Palatine. He may have moved to Chicago. He died June 16, 1936 and is buried in Mt. Greenwood Cemetery on the southwest side of Chicago. The fountain in the yard of the house is said to have come from the 1893 Columbian Expostion in Chicago. About 1929 or 1930, the house was torn down. A few stores were going to be built there. The concrete foundations were laid in and remained there for many years. The depression stopped the building from being completed. In the 1950’s, Jewel Tea took over the property and built its first store here in Palatine. In the late 1960’s, Jewel built a bigger store on Plum Grove and the old one became an S & H Green Stamp store. Later still it became Mia Cucina’s restaurant. Once again a mall of stores and condos above was scheduled to be built there and the restaurant closed down and buildings on the rest of the block were torn down. A downturn in the economy again stopped construction and the building stands empty and alone on the corner of Brockway Street and Wilson Street.