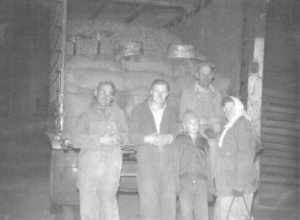 The Harry Alten family owned a truck farm at what is now the Palatine Distribution and Processing Center of the U.S. Postal Service at 1300 East Northwest Highway. The 60 acre farm was bounded by the west side of Arlington Crest Subdivsion, Northwest Highway, Salt Creek and the south end of the Charles Rizzo farm. They lived there from about 1944 to 1956 and raised all kinds of vegetables including cabbage, green beans, leaf lettuce, spinach, onions, carrots, parsnip and cucumbers. They placed the produce in sacks or bushel baskets and trucked them down to South Water Market in Chicago. This photograph shows three brothers Gilbert “Mike” Alten, Harry Jr. and Dale with their father and mother Harry and Laura behind a truck full of sacks of onions. 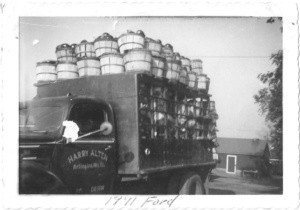 This truck has baskets of eggplant. The farm had an Arlington Heights address at the time.

These photos show the house and two smaller farm buildings. The one behind the fuel tank was formerly a hog barn. The other was a corn crib. Just to the right of the farmhouse is a little shed that kept the well machinery from freezing.

This photo demonstrates how relatively ’empty’ the landscape was in the 1950’s. Row upon row of baskets of onions were allowed to dry in the sun. The photos were taken about 1955. The next year the Alten family moved out to Harvard, Illinois and continues to grow vegetables on a truck farm.
Thank you Harry Alten Jr. for allowing us the scan your photos and taking the time to tell us your story!