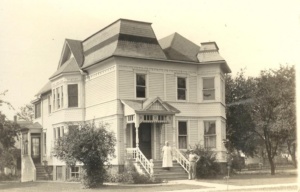 Charles W. Ost was born in Chicago in 1847, the son of Wilhelm and Charlotte. He was four years old when the family moved to a farm in Ela Township where he grew up. He married Caroline Meier in 1875 in Long Grove. Caroline was born in Germany in 1854. The couple lived on the Ost farm where their four children were born. In 1887, the Ost family moved to Palatine though they kept the farm. Charles went into business in the firm of Batterman, Abelman, and Ost. The firm operated a flax mill, flour mill, and a lumber & planning mill. This photo of the Ost residence at Palatine Road and Greeley Street was across the street from the flax mill. The mill burned in 1903 and was never replaced. In 1906, Charles sold the flour mill to his son, William, and later retired from business. Charles was the chief of the volunteer fire department from 1893 to 1917. He died in 1922. Mrs. Ost died in 1932. About 1960, Heng Wing’s Chinese Restaurant was built on this location and is still operating in 2011.