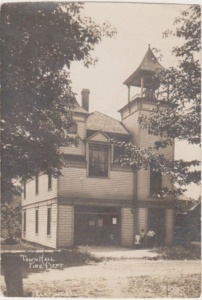 This village hall was built in 1899 on Slade Street between Brockway and Greeley Streets. The downstairs was the fire station with the fire bell tower at the right. The second floor was used for board meetings and entertainment. It could also be used for other kinds of public meetings. Later the volunteer fire department raised the money to build a new fire house at this location. That brick building is now the home of the Slade Street Fire Station shops.