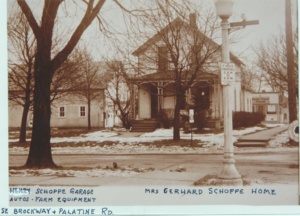 Mary and Gerhard Schoppe came to Deer Grove to farm in 1863. They had five children. Of the five, Henry did not marry and stayed in this house with his mother. They had moved into town in 1893 and Gerhard died shortly after. He opened a garage here. First he sold autos such as Fords and Pontiacs. He then sold tires and repaired broken equipment. Mary lived to be 98 and died in 1932. Henry died the following year. This house was located on Brockway Street south of Palatine Road where the parking lot for World Wide Liquors is now. The auto garage became the Cork & Bottle after World War II. Both buildings were torn down in 1958.