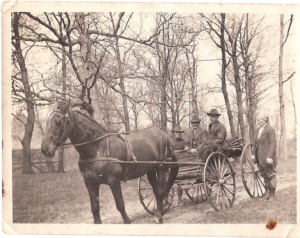 This photo was taken in Deer Grove Forest Preserve in 1922 or later. The woman standing at the right is Harriet Nichols. Her husband, Charles, was the warden of the preserve, the first in Cook County. He beame ill and died in July of 1922. A month later, Harriet was appointed to her husband’s position. Harriet was born in Vernon Township in 1968. The couple had one son and lived in Deer Grove during the time they worked there. Palatine claims her as the first woman forest preserve warden. She died in Florida in 1952.
Gus Bedurske, the forest preserve caretaker, is driving the wagon.